About a year ago I was looking for a tough logic puzzle game on my Android device. I tried a few candidates, but they were all boring. Either they were too simple, or lacking variety in their levels.

So, I decided to make my own game, called RanaCidu. You can find it on Google’s Play store at: http://play.google.com/store/apps/details?id=nl.tistis.ranacidu.

In the sequel I will share some ups and downs with you.

Play the first level of RanaCidu 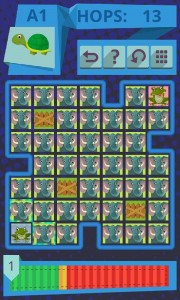 First of all, there are still no games I was looking for a year ago. So, RanaCidu is innovative and unique, since there are no similar games. That makes it hard to describe the game. The easiest way for you is to install and play it. Nevertheless, I will give it a try by a screenshot of the first game level. In the bottom left corner the frog called Rana is waiting for some help. His goal is to reach his girl friend Cidu in the top right corner. Rana starts on a square with an elephant, just like most other squares in this level. On such an elephant square Rana can only hop to the 4 neighbour squares at the left, right, above and below. So, at this moment Rana can only hop to the right and above. In this level, the target is to reach Cidu along the shortest path. Rana can do this by making 12 hops. This is the least number of hops possible to Cidu. Together with the first hop to its start position, this makes 13 as indicated at the top of the screenshot.

When progressing to Cidu the number on the shield at the bottom of the screen increases. You have to end in the green area for a perfect game. You are allowed to make 2 extra moves and end in the yellow area for going to the next level. If you end in the red area, then you fail for this level and a retry is needed.

For a good score, try to finish as quickly as possible and (in this level) with the least number of hops. There are also other factors affecting your score; I will come back to that later. The icon of the turtle is a reminder for finding the shortest route. Since turtles move not so fast they are eager to hit their target as quickly as possible in the least number of moves. Got it?

There are also players who try to visit all squares in this level. They appearently don’t read the goal or don’t understand it. Alas, their score is very low.

The four control buttons in the play screen look like the 4 Musketeers, since sometimes there are only three…..
The leftmost button is for taking back a hop. This prevents starting the level all over if you touch a wrong square by accident. However, this handy feature is not for nothing since it lowers your score!
With the next button, a bulb, you can ask for a hint. Computation of the best hop in some situation may take quite a while. For the first level the computation of the shortest path is very quickly. The underlying algorithm has been discovered already decades ago by E.W. Dijkstra. I attended the classes of this famous professor at the University of Technology in Eindhoven, so that implementation was a piece of cake. The computed optimal squares are shown by a red/black frame. Using a hint will also lower your score. Besides, it will cost you one coin.
The third button is for restarting the level : it resets the time spent, and also the punishments for take backs and hints.
The fourth button brings you to the level overview.

The scores of other players 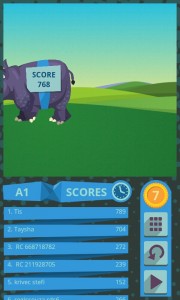 The path finishes when reaching Cidu. A quick outcome is shown on a moving shield. It says “Perfect!!” for ending in the green area, “Well done !” for the yellow area, and “Try again !” for the red area. Tap OK to view the score screen.

On the score screen our big, fat friend Rhino shows your score. And below you see a list of most recent scores with you on top. You can scroll vertically to other players as well. Flinging the list header to the left or right reveals all-time-high scores.

Since you love to continue playing the next level just tap the arrow at the bottom right! 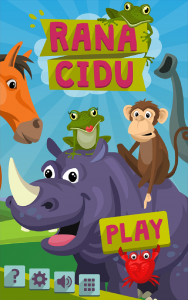 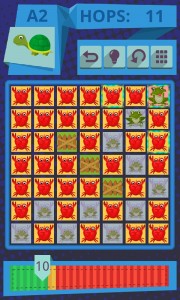 The next level looks a bit different. There are no elephants but crabs. And neighbour crabs can only be reached diagonally. Note that you can only visit about half of the squares!. Think of a chessboard filled with bishops (just like crabs). The bishops on the white squares can move only to other white squares. Since the same holds for the bishops on the black squares, these two clans never meet.

But for the rest you can easily make a path to Cidu.

At the end of the animation you are triggered for changing your nickname. After installation and starting the game you have been assigned a nickname that is derived from your email address. You saw that name already in the score lists. You are able to change the nickname via the settings button in the splash screen.

From the score screen press the BACK button on your device (twice) to enter the splash screen. At the bottom there are 4 small buttons. The left one shows some help, the next one is the mentioned settings button. With the third button you can toggle the music, and the fourth one brings you to the level screen.

So, now tap the settings button, and you see a scrollable window of options. If you do not like to show your name to the world, then you can replace it by some magic number starting with RC. Note that this setting is stored in the database, so that internet must be turned on! By touching the CHANGE button another requestor appears for entering a new nickname. There are some restrictions about the length: it must be between 2 and 20 characters. Furthermore, the nickname must be unique! Bad luck if it exists already: you should have installed RanaCidu a lot earlier. Also, nicknames must be decent. Otherwise, I will change it for you! For example, if you enter “Bad game” I will change it to “Bad gamer”.

There are 2 other settings. For the “Target mode” you can toggle between Normal and Dude. This might be helpful at difficult levels. In Dude mode the goal is made somehow easier. And last but not least, you can switch the croaking Sound of Rana on or off. Kwaaaak!

On to the next level 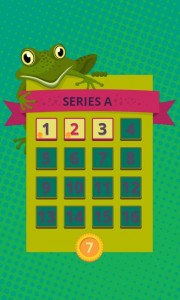 The level screen shows levels. That is pretty obvious, isn’t it? The yellow background of a level indicates that it can be played. A level can only be played after finishing the previous level successfully. In this order you will encounter increasing difficulties and more features.

The latest played level has a red number. So, that level is started when you tap the PLAY button on the splash screen. Furthermore, a small coin is shown on the levels that have been finished perfectly. You earned this coin once. Earlier, non-perfectly finished levels can always be played again for gaining a coin. And, if you finish all 80 levels perfectly, you will be added to the Hall of Fame !!

Sometimes you might be curious to your score of an already played level. Well, you can view it again. Just tap the level number long enough for activating its score screen.